Age Related Macular Degeneration (AMD) blurs the central part of the vision which we use for seeing detail by damaging the macula. In western countries it is the main cause of vision loss in people over the age of 60. Their are two forms of AMD, wet and dry, this article deals with both separately. Dry AMD is far more common than Wet AMD. 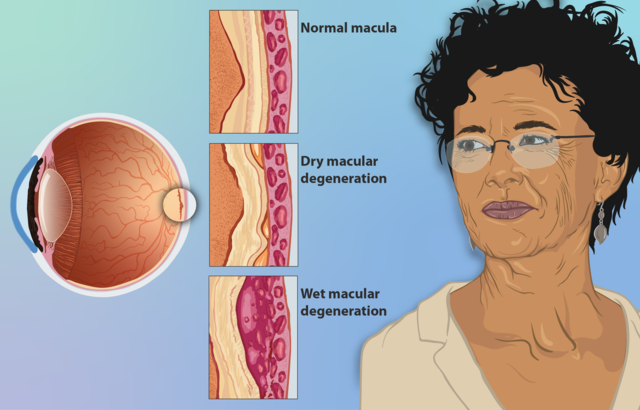 Wet AMD is caused by abnormal fragile blood vessels growing under the macula where they often leak blood, which moves the macula. Wet AMD causes loss of vision far quicker than Dry AMD and is also considered far more serious. One of the first symptoms of AMD is straight lines appearing wavy and curved.

Dry AMD is caused by the light sensitive cells of the macula breaking down which over time will cause loss of vision and a blurred spot in the center of vision. One of the first signs of Dry AMD is drusen (yellow deposits under the retina). Dry AMD usually affects both eyes, but has been known only to affect one. If found in it’s early stages Dry AMD can now be prevented from advancing using a specific high-dose formulation of antioxidants and zinc which has recently been developed.